Congress was assembled in Independence Hall, at Philadelphia, 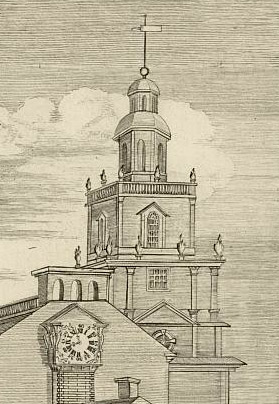 when the Declaration was adopted, and, connected with that event, the following touching incident is related. On the morning of the day of its adoption, the venerable bell-man ascended to the steeple, and a little boy was placed at the door of the Hall to give him notice when the vote should be concluded. The old man waited long at his post, saying, “They will never do it, they will never do it.” Suddenly a loud shout came up from below, and there stood the blue-eyed boy, clapping his hands, and shouting, “Ring! Ring!!” Grasping the iron tongue of the bell, backward and forward he hurled it a hundred times, proclaiming

“Liberty to the land and to the inhabitants thereof.”

– from the Introduction of the 1848 book “Signers of the Declaration of Independence” by B.J. Lossing